I noticed recently that my 15mm sci-fi collection had a glaring omission; the spider drones. They are lovely, iconic little models that crop up everywhere, except on my own table, so with my Christmas GZG voucher I decided to put that right and ordered a few along with some other wheeled and tracked gun carriage drones.

Jon got in touch to say that he was re-working the models, and would I rather wait or receive the existing models? This was a no-brainer, and about a month ago I received some beautiful little spider drones and mobile weapon platforms.

[edit: all the new items will have new code numbers, including those that are direct replacements for the old versions. The old codes will be referenced so you will know what they’re replacing.] 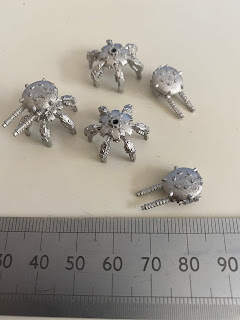 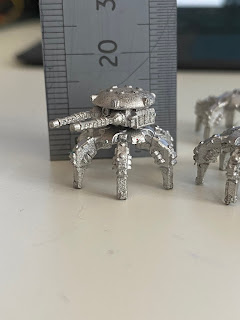 I'm pretty sure these have been digitally designed and printed, much like a lot of the weapons on the newer ranges such as the New Israeli. The detail is quite astounding and very sharp, as befits this kind of sci-fi hardware. The photos above are the new 84A pack; the standard spider drones with what looks like a plasma cannon. Below are the replacements for 84B, with rotary cannon. 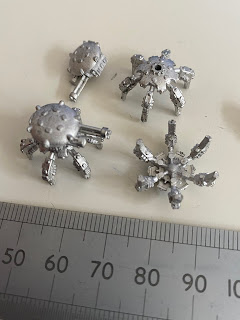 The detail on the underside of those is quite amazing!

A new version next; what I assume will be 84C. These are recon spider drones, an excellent and welcome addition to the line. 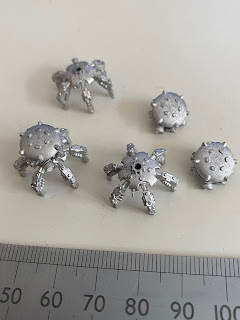 I think the next model excited me the most about these new spider drones. Jon sent a sample of another new model to the range; large eight-legged spider drones. It never occurred to me that the spider drones may have been slightly mis-named, having only six legs, but now we have some proper spider drones!

It looks like these are modelled with heavy auto-cannon and heavy plasma cannon options and are significantly larger than the six-legged version.

I have also heard rumour of a scorpion drone with an elongated body, a turret at the head and a ‘sting in the tail’! 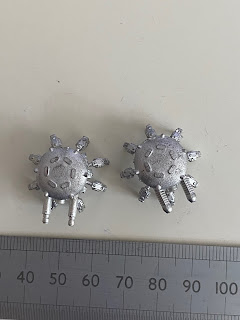 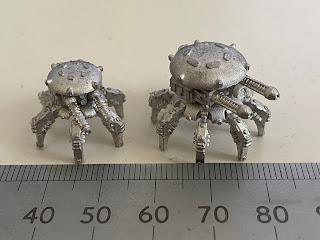 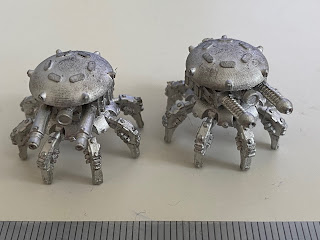 Next up are the wheeled drones. First with autocannons (69A), then with missile launchers (69B). The new chassis appear to be lower and sleeker than the previous models. Possibly slightly larger, but I don't own the previous models, I'm just looking at the pictures of those on the GZG website. Again these appear to have been digitally modelled and printed and are much better for it. 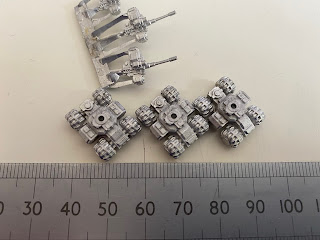 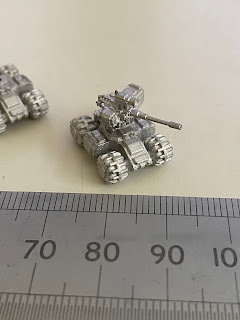 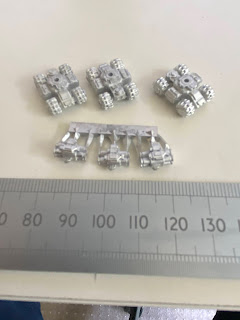 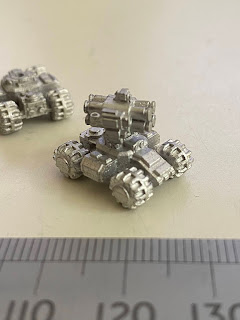 Finally, I received a few samples of the drone with tracked chassis. It will come with autocannon, missile and rotary cannon variants. The tracks are really nice and are mounted on a similar chassis as the wheeled drones. The rotary cannon is incredibly slender and unfortunately is proving tricky to cast so may need to be beefed up a bit before it makes it into production, which is a real shame.

The new models will undoubtedly be a part of the Remotes, Bots and Drones section of the website, and I imagine Jon will be keeping the moulds for the old versions available when these replace them on the website, in case you need to purchase drones to match any existing ones you may have.

Ideally, you'll want to replace them all with these though, surely!

Keep an eye on the GZG website for when they become available.

Email ThisBlogThis!Share to TwitterShare to FacebookShare to Pinterest
Labels: GZG

Are polls a waste of time?